END_OF_DOCUMENT_TOKEN_TO_BE_REPLACED

MACIAS PR has run media campaigns for Congressional and US Senate candidates across several states, including for an unknown Congressional challenger who defeated an incumbent in New York. Macias also consults a member of Congress.

The firm has secured coverage for its political clients with CNN, NPR, CNBC, Politico, Chicago Tribune, New York Times, Washington Post, as well as with local and national segments on Spanish TV – in just the past quarter.

“Political polls with margin of errors have historically only been available to powerful incumbents or heavily funded campaigns, but that’s changing,” said Macias. “Our firm has invested in technology and formed partnerships that enable us to run scientific polls on the same scale as presidential political pollsters. These polls come with the same margin of error as those national polls, and can fit any candidate’s needs or budget.”

Macias says an effective poll can reveal issues most important to voters and who is more or less likely to support the challenger over an incumbent. Polls can also reveal vulnerabilities and strengths with challengers that can assist with media campaigns.

“We craft our polls with the news agenda in mind, making sure the questions will stand up to any scrutiny from reporters and editors,” said Macias. “We can also keep poll results confidential when needed.”

Macias is a former Executive Producer with NBC and Senior Producer with CBS in New York. He’s also a frequent contributor with CNBC and The Daily Caller, providing political, crisis and branding insight on businesses and candidates in the news. He founded the firm in 2009.

END_OF_DOCUMENT_TOKEN_TO_BE_REPLACED

A popular entrepreneur publication – The Native Society Magazine  – recently profiled the founder of MACIAS PR – Mark Macias. Their editor asked some thoughtful questions on the PR industry, emerging trends and where the firm finds inspiration.

It’s not easy coming up with new story angles on a daily basis, yet MACIAS PR continually does that. It’s one of the reasons why we were just named the 2019 Strategic PR Firm of the Year by marketing peers. It’s the third year in a row that we were honored with it.

Here’s some excerpts from the interview.

Your most difficult moment at the Business? (and what did you learn?)

When I left CBS, let me just say it was not a friendly goodbye. I wrote a book, Beat the Press: Your Guide to Managing the Media, and CBS accused me of revealing insider secrets. It’s a long story, but when I left CBS, I didn’t have a golden parachute. But I did have a laptop, invaluable experience with the media, and a stronger desire to succeed. I was still hungry even after careers with NBC and CBS in high profile roles. That energy took me through those poor times when I was eating cold pizza and freezing in my apartment because the heating was so expensive. But I plowed through – and I learned that if you are talented and work hard, you will succeed over time if you combine that with perseverance.

Career advice to those in your industry?

I had a call this morning with a former TV reporter who is leaving the industry. He’s thinking about transitioning to PR. I said – it’s tough. It’s tough going from network TV to local TV because the pace is so much faster. Many TV producers find it difficult to transition from network to local TV because of the pace and daily grind. It’s similar with PR and agency work. You are constantly pushing a client to the media, selling a reporter, speaking with new potential clients, assuring current clients. It’s emotional, but I think if you genuinely love people, you will love the connection that comes with PR.

You can read more of this interview with Mark Macias by clicking here. Want to see how this experience inside the media can help your business grow? Click here to get a PR estimate or click on the green button at the bottom to schedule a call with Mark.

END_OF_DOCUMENT_TOKEN_TO_BE_REPLACED 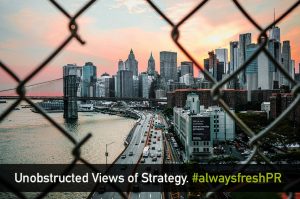 MACIAS PR recently published a social media post that showed Lower Manhattan through a different lense. It ignited a conversation in our office on why most PR firms fail when it comes to media strategy.

Strategy is a popular word in business, but in the media, it’s really over-used. Everyone claims to have a strategy, but few PR firms are able to capitalize on that thought process like MACIAS PR. And you want to know why? It boils down to our  perspective from inside the news room.

But this isn’t about the past. This post is about the present and how that perspective can help your business grow. MACIAS PR has a deep understanding in how editorial is created. We’ve worked with reporters at the local and national level – in TV, print and online.  Even today, many freelance journalists are a part of our team.

It’s one of the reasons why MACIAS PR was recently named the 2019 Strategic PR Firm of the Year. Our unobstructed view of the media helped us secure stories for our clients in 2019 with all of the big news organizations.

How much does PR cost?

PR is not easy. If your PR team is running into brick walls, reach out to us for a free PR estimate by clicking here. We’ll break down the chain link fence and give you a detailed picture on how we will take your firm to the top of the Manhattan skyline, positioning your brand as the industry leader.

Marketing peers named MACIAS PR the 2017 and 2018 Strategic PR Firm of the Year. In 2015, 2016 and 2017, Finance Monthly named MACIAS PR the Financial PR Firm of the Year. The founder – Mark Macias – is a former Executive Producer with NBC and Senior Producer with CBS in New York. He’s also a frequent contributor with CNBC and author of the books, Beat the Press: Your Guide to Managing the Media and The Tao of PR.