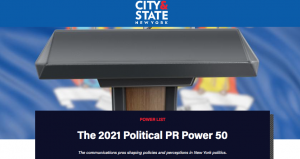 We’re excited to announce that City & State Magazine has named our founder, Mark Macias, to the 2021 Political  PR Power 50 List.

Every year, City & State features the top communications pros in New York who are changing the media and political landscape. This list focuses on PR executives directly involved in the world of New York politics and policy.

As the article states at the top of the story, “there’s always some kind of calamity or scandal” in New York. The politics go year-round from City Hall to Albany and Washington, DC. Our founder, Mark Macias squeaked in at #50 on the list.

“This is a super big honor and surprise, especially since we weren’t looking for it,” said Macias. “This publication takes me back to my days as an Executive Producer with NBC and Senior Producer with CBS. I remember reading City & State Magazine on a weekly basis, making sure I stayed in the loop on local politics. Getting on this list feels good because I know influential political and business leaders read it.”

The selection highlights a new political polling service that MACIAS PR launched in 2020. The agency is now conducting scientific political polls to help candidates gain more insight on their name recognition and voter sentiment. You can read more on the list here: https://www.cityandstateny.com/articles/power-list/power-list/2021-political-pr-power-50.html