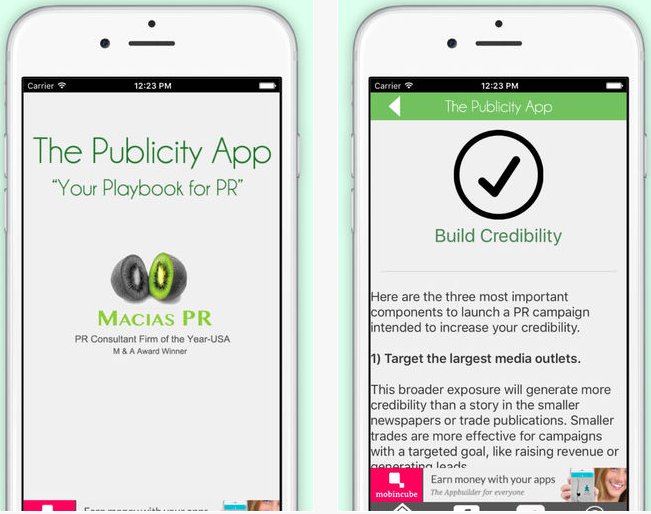 The Publicity App was developed by our team, applying many of the media strategies we use to secure coverage for our clients. The free mobile app teaches users how to create a timely, targeted and customized narrative for any media campaign. It includes real life examples of successful media campaigns and contains interactive games that strengthen your understanding of the PR industry.

Of course, it’s important to remember every PR campaign is customized based on timely components, the competition and even a business model. Users of The Publicity App must still apply critical thinking and creativity for their own customized media campaign, but the app does guide every business owner or entrepreneur who doesn’t know where to start.

It’s not what you say, but you do that is remembered by others, yet surprisingly few people remember this during a crisis situation.

Sociology studies show body language makes up 55 percent of our communications and when it’s replayed on TV, it becomes even more pronounced.

The former Governor of Illinois, Rod Blagojevich, seemed to forget this during his crisis that forced him out of office.

For those who don’t remember, he was accused of trying to sell President Barack Obama’s old US Senate seat.

But the crisis visual got worse when the cameras were rolling and decided to go for a job, knowing full-well that the media wanted to ask him questions.

He put on his running shoes, left his home, and a throng of reporters pursued him while he ran away from them. He apparently didn’t think ahead into what this image would say to viewers watching the news.

Blagojevich gave reporters their new visual that kept him in the news cycle. In addition, he gave TV reporters video they could write to.

If you are ever ambushed by a reporter, don’t run from the camera or put your hand in front of it. That will only make you look guilty.

Instead, be polite the reporter and explain why you will speak with the reporter if he or she takes the time to call your office.

As a former investigative producer with American Journal, CBS and NBC, I can tell you reporters love the ambush interview because it makes for great TV. Viewers stay tuned when they see a clip showing a person running from the camera – and believe it or not, they like it when you push their camera away.

So next time you are in a crisis mode, don’t let your image take a back seat to kindness. The camera will thank you for it.

Mark Macias is a former Executive Producer with WNBC and Senior Producer with WCBS. He’s also the author of the communications book, Beat the Press: Your Guide to Managing the Media. Macias now consults small and large businesses on how to get publicity. You can read more on his firm at MaciasPR.