Politicians are notorious for not answering the question. Journalists ask the yes or no question, and they scramble to another topic instead of staying on the message. Here’s how it came across recently when an MSNBC reporter asked candidate Scott Walker a simple yes or no answer.

KASIE HUNT: Do you think that birthright citizenship should be ended?

SCOTT WALKER: Well, like I said, Harry Reid said it’s not right for this country — I think that’s something we should, yeah, absolutely, going forward-

HUNT: We should end birthright citizenship?

HUNT: And you should deport the children of people who are illegal immigrants?

WALKER: I didn’t say that — I said you have to enforce the law, which to me is focusing on E-Verify.

The Importance of Staying on Message

I work with many tech startup entrepreneurs who are typically less media savvy. Their delivery frequently works to their advantage because they are authentic, but this isn’t politics. If you’re trying to promote your business or service through the media and you have a reporter listening to you, it’s important to stay on message and to continually sell your services.

Don’t learn the hard way. A video client recently told me that she was interviewed by NPR, which is a national news organization that reaches influential and educated listeners. She told me a reporter spent two different days on the phone with her but she wasn’t mentioned in the story. She asked me what she could have done differently.

I wasn’t listening to that interview, but if a reporter calls you twice – he or she is rooting for you. They want you to give them the context or sound that they need for their story. Journalists are inherently self-interested, which isn’t a negative stereotype in this situation. When it comes to writing their story, they need to be self-interested or every other person will influence the direction of their message.

This is why it’s so important to stay on message during an interview with the media. You have little time to persuade this journalist that you belong in his story, so measure that time well. Don’t spend 15-minutes giving background on facts if the reporter didn’t ask for that. Facts don’t sell the story. Context sells your story. Perspective brings commentary and color to any story. Reporters want color and context because color brings a story alive and context makes it relevant.

Remember that the next time you get a chance to sell your tech or business story to the media. Stay on message, the clock is ticking.

It’s difficult for all mobile app developers to stand out – unless you have the media behind you.

Our passionate team is proud to say our new mobile app, Blush No More, is the fastest growing communications app on the app stores, according to statistics from Mobincube.

And that growth came without any advertisements. Our entire user acquisition campaign was driven by organic news coverage with the tech, national and international media led by Macias PR.

The Daily Mail in the UK called Blush No More the “ultimate dinner party app – able to feed you a conversation starter at just the right time.”

Channel 11 also tracked down a Blush No More user and asked him what he thought of theapp. Here’s what Iwan Lubberts from Holland told their reporter on TV:

“It really makes you feel like a local. If you look up the lines, they are pretty American. It’s helping me out to understand American people and how to deal with American people in language,” Lubberts said.

That Channel 11 video on Blush No More went viral within hours and was picked up by AOL, spreading the word around the world. Since then, other news publications have run stories on how this is a genius idea that everyone can use.

LovethatMag – a popular US online publication that covers the latest trends, wrote this review: “If you’re someone that tends to find yourself not knowing what to say amidst an awkward silence, then new app ‘Blush No More’ could be your one stop shop for ice breakers, and a whole lot more.”

That is publicity and endorsements that no ad can buy.

How the Media Drives App Downloads

Blush No More has seen exponential growth in downloads following this international and online media exposure. The percentage of downloads has grown more than 1300 percent following just 3 days of media exposure. It maintained that momentum throughout July and August 2015, becoming the fastest growing mobile communications app, according to its publisher, Mobincube.

So the next time you’re looking at your app analytics, wrinkling  your forehead, wondering what can you do to make your tech startup stand out – take the initiative and reach out to Macias PR. If the green box at the bottom of your screen shows we are online, ask for Mark and I’ll give you a media strategy after learning more about your app. 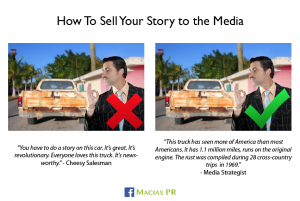