How Much Do PR Firms Cost? 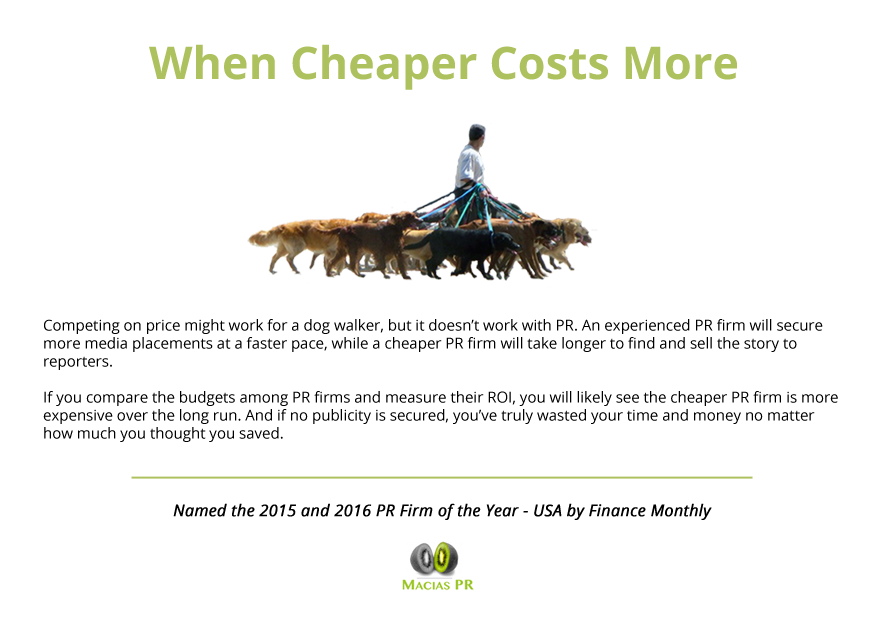 During my time with NBC and CBS in New York, I worked with a lot of inexperienced publicists who were trying to get stories on TV. Most of these publicists spent hours spinning their wheels, trying to get their ideas in front of us.

From a business perspective, these PR firms were spending a lot of money upfront, trying to get traction with the media. A smarter approach would have saved them time and money.

If you compare budgets among PR firms and measure their ROI, you will likely see the cheaper PR firms are more expensive over the long-term. And if they don’t secure any publicity with the media, than you have truly wasted your money – no matter how much you thought you were saving at the start.

As the owner of a PR firm, I now see the other side. We don’t launch PR campaigns with a spray and pray approach, meaning we send our ideas to everyone and hope someone will pick it up. Instead, we approach every campaign in an efficient manner by identifying the strongest narrative needed for coverage. It is similar to how I ran the Special Projects Unit as an Executive Producer with NBC in New York.

Before Macias PR launches any media campaign, we identify the strongest narrative for coverage. Then, we find the right people to share this angle with. Sometimes, a great story can succeed with literally a text to the right journalist, while other times, it might take a phone call. That saves time and money.

An efficient PR firm will sell the story to the media faster and at a more productive cost. What does this mean to you? Don’t price your PR firm like you would a dog walker. The job of walking a dog will likely get done regardless of price, but with PR, a story may not always get placed regardless of price. In simple business practice: you can’t spend more than you make. A cheap PR firm that is spinning its wheels will in the near and long-term run out of time before the story is sold to the media. However, a solid, experienced PR firm will find ways to sell that story faster and with less legwork.